BBL HERO can treat the face and larger areas of the body such as the arms, legs, chest, and back in just 2-5 minutes and offers dramatic results after just one treatment. BBL HERO enables the correction of multiple skin conditions such as acne, age spots, freckles, vascular lesions such as cherry angiomas, and rosacea. BBL HERO is a non-invasive and painless treatment that restores and revitalizes the skin and can be combined with other AYA treatments, such as SkinTyte™, for enhanced results. 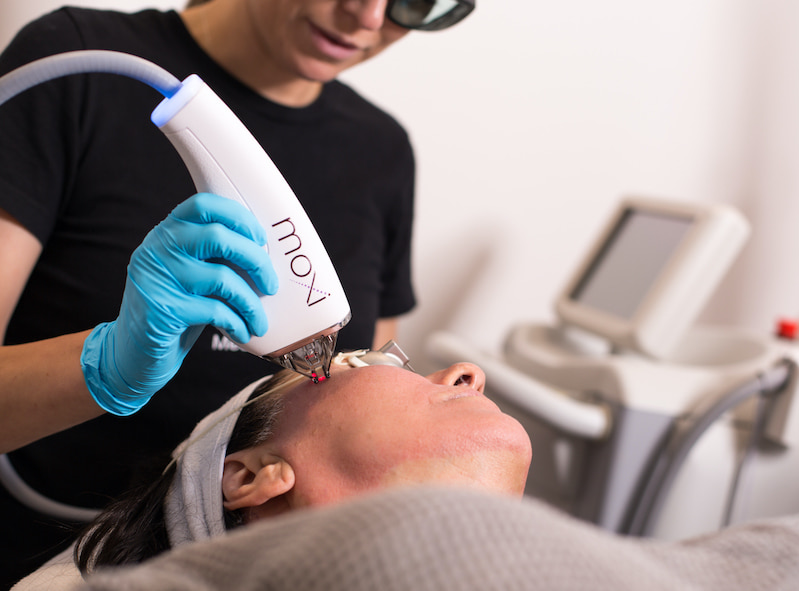 MOXI was developed with active patients in mind; those who want to reverse natural signs of sun damage and aging can now correct uneven pigmentation and improve the overall texture and tone of their skin in under 30 minutes. Improvements can be seen after a single treatment, however, results will improve with several treatments depending on your cosmetic goals.

We love that MOXI allows us to revitalize skin for our patients, regardless of the season, your skin type, or age.

AYA is thrilled to offer Sciton’s ProFractional laser, the ideal solution for achieving dramatic results without considerable downtime. Unlike fully ablative resurfacing lasers, which remove the entire surface layer of skin on the treatment area, ProFractional is a fractional or partially ablative laser, ablating narrow channels of skin and only a fraction of the total treatment area. This fractional targeting stimulates the body’s natural healing response, and leaves the surrounding facial tissue untouched to promote rapid healing. ProFractional has a variety of benefits, including highly customizable combination treatments, shorter recovery time, and exceptional results.

ProFractional is typically used on the face, neck, and chest and is excellent for reducing visible signs of aging such as fine lines and wrinkles, sun damage and hyperpigmentation, scars, and improving skin texture and tone. ProFractional is a comfortable non-invasive laser treatment that rejuvenates the skin and can be done in combination with other AYA age-defying treatments, such as BBL Hero, for optimized results. 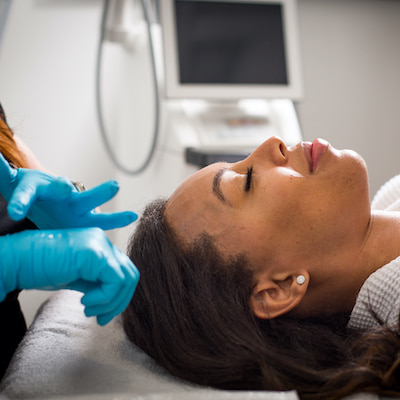 View before and after photos of Sciton® MicroLaser Peel

Similar to a chemical peel, the Sciton® MicroLaserPeel™ is an outer to mid-epidermal peel to improve skin texture and tone. This peel can safely treat the neck and face as well as the chest and hands. The MicroLaserPeel™ can be customized to each patient’s individual skin and needs. Since treatment levels can be adjusted, Sciton® MircoLaserPeel™ can be used for patients of various skin types and tones.

Deeper Erbium treatments can improve the appearance of acne scars and the signs of aging. The MicroLaserPeel™ improves skin texture and tone, leaving patients with a clearer complexion and a healthy glow.

Sciton® BroadBand Light™ (BBL) is an innovative, light-based technology that uses pulses of light energy to gently remove acne, uneven skin texture, skin discoloration, vascular lesions, and unwanted hair. Sciton® BBL™ can treat any area of the body, with the most common areas being the face, neck, and shoulders. The treatment areas will be gently heated to stimulate collagen production and to restore skin to a more youthful appearance. Additionally, Sciton® produces photothermal energy to help treat small blood vessels that contribute to exaggerated redness and sun damage.

AYA™ Medical Spa’s cutting-edge phototherapy treatment with Sciton® BBL™ applies a unique combination of controlled heat and light to improve the appearance of a broad range of skin conditions caused by skin aging and sun exposure including age spots, freckles, and sun spots. The light energy delivered by the BBL gently heats the upper layers of the skin. The heat absorbed by the BBL laser thickens the tissue, helping to restore the skin to its natural state. In some cases, BBL™ can be used to treat or reduce bruising. 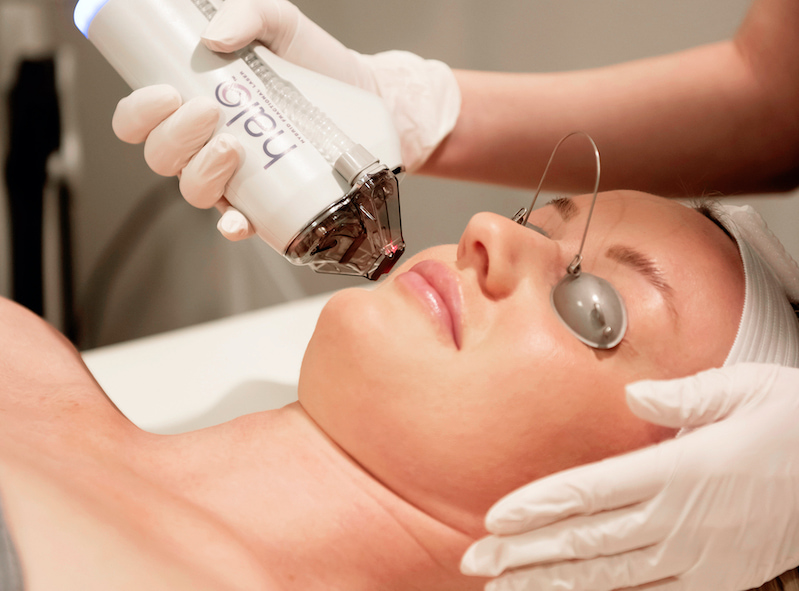 AYA Medical Spa is the first in Atlanta, GA to recently incorporate Halo™ by Sciton® Laser Resurfacing, the world’s first and only tunable hybrid fractional laser on the market into our list of non-invasive procedures. By utilizing this innovative technology, it allows our licensed estheticians and physicians to treat nearly any skin condition ranging from sun damage, elasticity, age spots, hyperpigmentation, melasma, wrinkles and vascular conditions.

The Halo™ hybrid fractional laser system from Sciton® works by combining two different types of treatments in one. Until now, laser skin resurfacing treatments, like the Sciton® Broadband™ light and Erbium lasers, provided either ablative or non-ablative effects. While ablative lasers work on the surface, removing the outermost layers of dead and damaged skin, higher frequency, non-ablative lasers are able to pass through the skin’s upper layers harmlessly and heat the deeper tissues, stimulating collagen production and tightening the underlying skin from within. While the results achieved with ablative lasers are generally considered more dramatic, non-ablative lasers naturally engage the skin’s own healing processes and so can provide subtle lifting and firming of skin texture with significantly less recovery time. The Halo™ hybrid fractional laser system delivers high and low frequencies to the same precision location at the same time, allowing patients to achieve the impressive results of an ablative laser while enjoying the quicker recovery times that a non-ablative treatment provides.

Like the Sciton® dual laser resurfacing system, the Halo™ system is safe for use on most skin types (call us for details), tones, and ages and is fully adjustable, allowing it to be customized to each patient’s specific requirements. It incorporates “dynamic thermal optimization” technology that measures the temperature of the skin during treatment and automatically adjusts to ensure that the laser is always tuned to the patient’s specifications and even automatically compensates for changes in the scanning speed of the hand piece to guarantee even treatment.

Sciton® SkinTyte™ laser treatments tighten the skin of the face, neck, abdomen and arms using an advanced light-based laser system that emits rapid, gentle pulses of infrared light energy into the skin’s layers. SkinTyte™ skin tightening treatments utilize pulsed light technology to heat deep beneath the skin’s surface and jumpstart the body’s natural healing processes. Over time, this healing process stimulates renewed collagen to increase the skin’s firmness and create a more youthful look. An added benefit of the SkinTyte™ laser system is that while it heats the skin deep below, it also cools to protect the treated surface areas (for extra comfort during treatment). Sciton® SkinTyte treatments are safe for all skin colors and patients can see firmer skin is a few short treatments without having to go under the knife (no surgery required to see your results, so you can return to regular activities immediately)!

Sciton® BBL™ laser hair removal delivers photothermal energy to hair follicles to impede future growth. This Sciton® technology can also be used to address other skin conditions such as acne, scars, and pigmented lesions. BBL™ can treat multiple hair follicles at a time, minimizing treatment times. A series of treatments, spaced 4-8 weeks apart, is typically required for the best results. This laser is also ideal for patients with active lifestyles, as it safely treats most skin types and has virtually no downtime.

What is the Difference between the Erbium and BroadBand Light™ (BBL)?

Sciton® contains two lasers in one, Erbium and BBL™, which are each used for different treatments. The Erbium laser is specifically used in the MicroLaserPeel™ to address wrinkles, scars, keratosis, sun damage, and uneven pigment. The BBL™ treats acne, unwanted hair, spider veins, and uneven skin texture. Erbium can only be used on specific areas while the BBL™ laser can treat any area of the body.

How does MicroLaserPeel™ work?

The MicroLaserPeel™ uses laser energy that is absorbed by the water of the epidermis. The laser instantly heats the water, allowing it to vaporize the top layer of skin. The laser strength may be adjusted based on the patient’s needs and is measured by the micron. Very small, 40 microns would be the equivalent of the diameter of a fine human hair. Depending on the patient, Sciton® can remove skin anywhere from 4 to 50 microns deep to reduce light blemishes such as sun spots, acne marks, and pigment irregularities. During the skin’s healing process, collagen production is increased to grow new, healthy skin cells to improve the overall appearance of the skin.

Will this procedure be uncomfortable?

The amount of discomfort varies among patients and the depth of treatment. This procedure is noninvasive, but we offer topical anesthetics and a cooling system to minimize any patient discomfort.

How long will it take to recover?

Healing times depend on the depth of treatment and post-treatment care. This procedure produces less residual swelling and redness than other laser treatments. The average downtime ranges from 3 to 10 days.

Does this procedure require any dressing or bandages after treatment?

No, Sciton® is noninvasive and will not leave any lesions as the skin heals. Skincare products such as moisturizers and serums may be recommended after the skin heals to maintain moisture.

When should I expect to see results?

Results can be visible as soon as skin heals after treatment (typically within 3-4 days), so multiple treatments sessions are not always required. However, depending on the patient’s needs, some patients with complex skin conditions will find better results with additional treatments spaced 4 to 8 weeks apart. Patients can choose a series of lighter treatments to achieve a gradual improvement with shorter periods of downtime.

The doctors at AYA Medical Spa have either authored or reviewed the content on this site. Page Last Updated: May 2, 2022

Sign up for our newsletter to get 10% OFF your 1st treatment & get exclusive updates about products, sales, and more.